How to Select an Analytical Probe System

Selecting a probe system is comparable to selecting an automobile. Like basic cars, most basic probe stations will get you from point A to point Z, but, also similar to cars, probe stations have a vast variety of modules and accessories to expand on basic system capabilities.

What are Analytical Probe Systems?

Analytical probe systems, also referred to as prober, probing system, probe system, are often used in low volume probing applications such as research and development, device characterization, product development and failure analysis.  They are typically not used in a high volume production probing applications such as a 24/7 (24 hours per day/ 7 days a week) environment. There are several vendors that manufacture analytical probe systems but the typical family consists of manual, semiautomatic and fully automatic systems.

There are three different types of Probe Systems that you should take note of. Let’s go into some detail about each one. 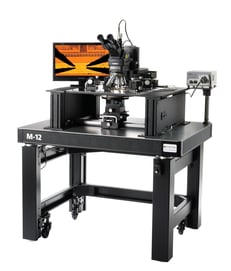 Manual systems are typically controlled manually, which means that the wafer stage and chuck (X,Y, Z and theta), platen (Z), microscope movement (X,Y and Z) and manipulators (X,Y and Z) are all moved manually by the user. These systems are normally used when there are not a lot of devices to measure or data to collect. A few advantages of manual probe systems are a minimum amount of training is required, easy to set up and to changeover from one setup to another and they don’t require electronics, PC or software which involves additional training and setup time. 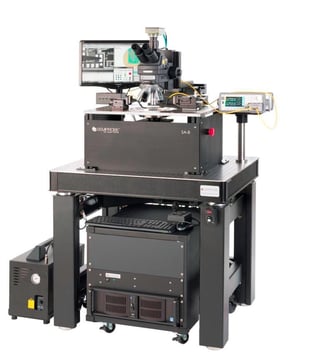 Semiautomatic probe systems are typically used when multiple or all devices are to be measured. They are also used when small pads or lines are being contacted or where the Z contact and overdrive (scrub) have to be precisely controlled.

For some companies, with small size wafers and die, semiautomatic probe systems are used to meet their production requirements. Semiautomatic probe systems consist of similar components as a manual system with the exception of the stage and controls. The wafer stage is usually programmable (X,Y,Z and theta) and is moved via control electronics and software. Software adds a lot of capabilities to the probe system. A typical software package consists of a navigator window, wafer map and auto align. Using the navigator function allows the user to move the stage in any direction at various speeds or in an index mode via a software joystick or a mechanical one. A wafer map program allows you to set the map up to match the device – wafer size, flat and die size. You can select what devices are to be probed, all or a sample with a random pattern, and save the entire set-up.

A fully automatic analytical probe system usually consists of the addition of a material handling unit (MHU or Robot) and pattern recognition (auto-alignment). They are typically used for production or when there are some unique requirements – no human handling, thin wafers or as a multi-purpose system to test wafers, wafers mounted on frames, wafers sawn and stretched on frames, carriers or trays of die. A link to an analytical probe system checklist …..www.semiprobe.com

What types of accessories are available to enhance a probe system?