How Does a Wafer Handler Integrate Into a Fully Automated Probe Station?

Integrating wafer handlers to create a fully automated probe station can be challenging and having a basic understanding of the process is extremely helpful.

Before we get into the details of that, let’s review what fully automatic probe stations and wafer handlers are.

Fully automated probe stations typically refer to probe stations that are equipped with a wafer handler, also referred to as a material handling unit (MHU) or robot and pattern recognition (PR) software, also referred to as auto-alignment. For example, one process the wafer handler and pattern recognition are capable of is removing a wafer from a cassette, placing it onto the probe station chuck, auto-aligning the wafer to the probes, waiting for the probe station to complete its testing, and returning it to the cassette – same slot or different one. 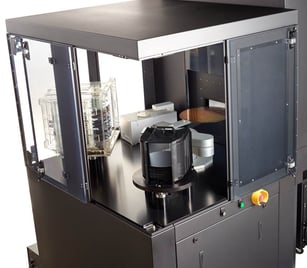 A wafer handler (MHU) is the material handling portion of the probe system. It is integrated with the prober and typically is provided with cassette holders (1 or 2), a pre-aligner, a robot with an end-effector (paddle) and a safety/environmental enclosure. Wafer handlers can often handle a variety of different wafer sizes that vary from 75 mm to 300 mm.

Fully automatic systems are typically used for production or when there are some unique requirements: no human handling, thin wafers or as a multi-purpose system to test wafers, wafers mounted on frames, wafers sawn and stretched on frames, carriers or trays of die. Many manufacturers prefer fully automated probe systems in order to minimize wafer handling, damage and the associated costs - particularly when producing wafers 200 mm and larger.

Wafers can be stored in simple cassettes or in enclosed devices such as front opening universal pods (FOUPS).  Wafer handlers incorporate a pre-aligner to ensure that the wafer is placed onto the chuck in approximately the correct orientation, minimizing the need for an angular adjustment by the stage.

If you are testing many wafers per day, and your production and test process is limited by test throughput at the probe station, a fully automated probe station can help eliminate the bottleneck by ensuring that your probe station runs close to 24 hours a day, with minimal operator attention required.

When considering a fully automated probe station, pay attention to the software integration.  The wafer handler and the probe station must seamlessly pass data back and forth so that the test results for each die on each wafer are easily accessible and can be communicated to the rest of the factories information system.

If your test process does not require frequent operator intervention, and you are testing multiple wafers per shift, a fully automated probe station will save labor and increase test throughput.   Adding a material handler to a probe station increases the probe station cost by $75,000 to $200,000 depending on the size, flexibility, and complexity of the system.

Do you need more information? Request a discovery call or join our email list for the most up to date semiconductor news.